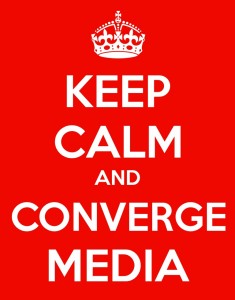 The Jetsons Future is loaded with new and exceptional opportunities.  If we want to take advantage of those opportunities before someone else does, we’d better be prepared for change before it comes.

If you’re asking the simple one-word question, “When?” the answer is…possibly much faster than you imagine.

The timing of change, change driven by ubiquitous access to a functionally infinite quantity of content (all delivered by broadband internet), is a function of two simple matters:

The answer to the first question can be found in the ongoing flow of new data regarding market penetration of smartphones, smart watches, and most notably, connected cars. After all, with screens already ubiquitous in the home and at work, the remaining place where most content users can’t currently access broadband internet is in the car.

This post deals with the second of those matters, and an extremely powerful argument regarding the pace of adaptation can be found by taking a trip back to the Truman administration.

Here’s guessing that people in the era of Give ‘Em Hell Harry* realized that change was coming. Here’s also guessing that they had absolutely no idea just how close matters were to a tipping point and how fast things were going to change. Thanks to a website I absolutely love, we have access to numbers that demonstrate the pace of change when an exciting new medium – television – was being adopted by American households.

Below are Hooper’s “Sunday-Saturday” evening ratings for Los Angeles in 1950.  (If you want to see the whole report, it’s right here.) Because Hooper measured television and radio in one study, we can see exactly how quickly usage of the new medium, TV, was growing.  It’s stunning.

At the start of 1950, 10% of media consumption at night – the time when households were most likely to be using the new medium of television – was made up of TV viewing; radio owned 90% of audience share.  When Guy Lombardo and his band – still six years from taking their show from radio to television – launched into Auld Lang Syne  at midnight on January 1, 1951, TV’s audience share had jumped 360% to a 36.4 share at night.

On Sunday afternoons of 1950 – sorry, we don’t have seven-day numbers to work with – TV jumped from a 2.2 share at the start of the year to a 23.5 by year’s end.  Weekday morning viewing is striking in a very different way. In a time before Today and GMA, television in L.A. had a 0.1 share in October 1950. Two months later, it was at a 4.5. (When you see these numbers, you begin to realize why Today bowed in early 1952.)

A few signs of recent change: According to our friends at Nielsen, 62% of viewing of television dramas is time-shifted. Cable penetration has shrunk from 65% to 55% in less than a decade. In print, a minority of Americans not currently eligible for Medicare read a newspaper.

It’s not particularly hard these days to find online screeds backed by lots of spooky-looking numbers pronouncing the death of television. Overreaction? Duh.

Yet, there are serious considerations here, and again, the sudden explosion of television over sixty years ago says a ton. When TV blew up in the early 1950’s, Americans didn’t stop listening to radio. To this day, well over 90% of us listen to radio regularly.  However, radio’s market share, once 100% of electronic media consumers, was quickly reduced to a fraction of that because overall time spent with the medium quickly decreased.

The time to be prepared for change is now!

We know where content usage is going – more and more, content is being consumed via broadband internet, whether on a web-connected television, a computer screen, a tablet, cell phone, or some other device. That’s The Jetsons Future.

It’s a future loaded with the opportunity to reach a far bigger audience than you ever did before. It’s a future where barriers to entry have fallen. (You don’t need to buy a broadcast license just to reach an audience any more, though it’s obviously quite valuable to have one.)  That’s the case for writers too, who can make out just fine on their own if they want to.

It is, however, a different future, and it’s important to realize that our long-standing definitions of content are eroding quickly. It’s a future that requires thinking differently than before, rather than doing the same old things.

It’s a future that’s been developing for a long while now.  Exactly, when it will fully arrive, is anybody’s guess. However, when it does show up, things will change very quickly.

Are you ready for it?

*Note: Being called “Give ‘Em Hell Harry” sure beats being called “His Rotundity” or “Andy The Sot”, doesn’t it?