Responsive Video Production: It’s About To Be A Thing 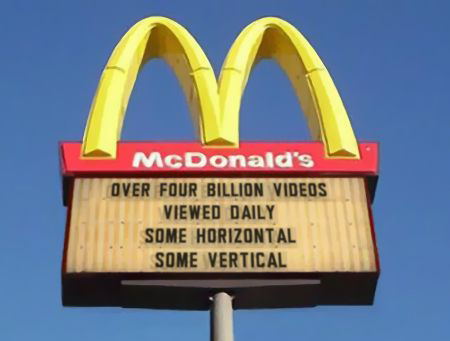 Planning on shooting video, in particular short-form video, including advertising? Are you shooting (a) horizontally or (b) vertically? The only correct answer to this seemingly silly question is (c) all of the above.

Now that camera phones have made filmmakers of us all – even if most of us are simply making films showing our adorable kittens and puppies – another critical rethink is upon us: we’re heading into the era of responsive video production.

Y’see, the “pros” have a simple way of differentiating themselves from the amateurs: they know how to shoot video correctly. What do I mean? Only a true professional knows that vertical videos – the ones that people shoot with their camera phones held upright – are, at least in the words of the nice people who made this charming little video, “no f&#@ing good”.

Just one problem: with video viewing on vertical (in other words, smartphone) screens up sevenfold in the last five years and now accounting for 29% of all video viewing, vertical videos are now, to paraphrase that not-at-all-arrogant video I just linked to, really f&#@ing important.

That’s why a few slightly-important players – WPP, Snapchat, the Daily Mail – created a vertical video agency this summer. Oh, and they’re not alone.

An important note: if you look at the entirety of that Mary Meeker Internet Trends slide showing mobile video use being up sevenfold, you’ll observe that TV and PC video viewing are flat over the same period. Mobile video is not cannibalizing any other video usage in the least; it’s creating all-new consumption.

All-new consumption means all-new opportunities, and those opportunities don’t have to cannibalize existing ones.

On a related note, that’s why it’s disappointing to see the ongoing freakout in film exhibition over the move to shrink the window between theatrical and digital release, particularly when it involves something as time-sensitive as horror movies in October.

In our new Jetsons Future media world, you’ve got to think differently.  How differently? Well, Instragram is now strongly impacting the sale of fine art.

Thank about that. Christie’s and Sotheby’s are now using the home of selfies to sell fine art.

Two conclusions, both of them ridiculously important:

The best websites are now designed responsively; they reshape themselves to conform to the screen you’re viewing them on.

If the era of responsive video production isn’t upon us, it will be here soon enough.  Are you prepared for it?