You Are 60% Banana: Surprisingly, This Has Ramifications For Your Career 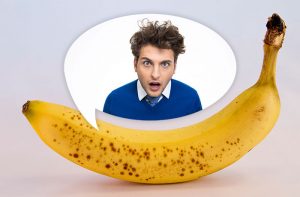 That headline is not a joke. You and I share 60% of our DNA with the product of several flowering plants in the genus Musa. Our DNA is primarily plantain.

Now think about this: y’know that schlub you deeply regret having to work with, the one you have nothing in common with? You two share 99.9% of your DNA. (Don’t worry – you’re also 99.9% genetically similar to all other human beings – including [insert name of your favorite person ever here] – so things could be worse.)

Here’s the point: things are actually a whole lot more alike than they appear. You think you have next to nothing in common with them, but you’re 99.9% the same as the Pope, a Kardashian, a Trump, a Clinton, and that jerk who dinged your car in the parking lot and didn’t leave a note.

Ohmigodohmigodohmigod, the SVOD world has gone mad! Netflix’s Narcos is about to show up on broadcast television! Not only that, but Netflix and Univision are working together on a series about El Chapo. (By the way, how sad is it that, here in El Lay, we refer to drug lords by their nicknames?)

It’s silly that the television world is distracted by the seeming “historic first” of Netflix, once a purveyor of TV reruns and movies that were past their theatrical and home video windows, now syndicating original content back to broadcast media. The difference between Neflix’s syndicating content from SVOD to broadcast and, say, premium cable’s HBO syndicating The Sopranos and Sex And The City to basic cable is about the same as the extent to which you are actually different from Justin Bieber: they’re 99.9% the same and 0.1% different.

Yep, it’s amazing that Netflix, once the service that was so similar to that UHF TV channel that showed ’50’s and ’60’s reruns and infomercials (when not shipping you DVD’s by snail mail) has grown into a producer of top-quality original content. However, that amazing thing happened five years ago. This week’s news is just details.  (And when House Of Cards eventually ends up on broadcast television, that’ll just be details too.)

Said differently, in The Jetsons Future, great content is great content. How you distribute it is hugely important. Oh sure, the details get pretty important when the financial difference between selling your show to a major network and a minor cable channel is substantial, but the real message is this: opportunities to benefit from what you create aren’t just broader than they used to be; they now run in all directions – from broadcast to cable, from SVOD to broadcast, and in any other direction you can imagine.

Nowadays, once you create content, you shouldn’t just ask yourself, “Where can we distribute this?” You’ve got three important follow-up steps after that:

This is equally true for all forms of entertainment content, of course. If your radio show isn’t also a podcast, you might want to work on that. Then think about what else your show can create – videos, blogs, “after hours” material – that you can use to enhance your reach and (here’s a novel concept) make more money

The sooner you stop confining your content to the box it’s always been in and start thinking about all the other ways you can share it and profit from it, the brighter your future will be.

Bonus information: you also share 90% of your DNA with a cat (luckily for you, not this cat), meaning that deep inside 90% of you is the potential to do adorable things that make for viral internet videos.

Let’s wrap up by remembering the old saying (allegedly an ancient Chinese curse, though there’s zero proof of that): may you live in interesting times. If you’re in entertainment, how could those words possibly be a curse? Seriously, would you prefer to live in boring times?

More to the point, these times sure are interesting.

They’re also exciting, and they present you with some great opportunities.  Grab yours.  Now!