Radio Needs To Go Over The Top 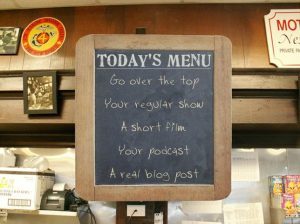 Sometimes, one little piece of something bigger jumps out at you.

It’s a quote from Gordon Borrell, among other things, the founder of the Local Online Advertising Conference that jumped out at me.  Asked about whether television and print folks are interested in podcasting and smart speakers, he answered thusly:

“Here’s a crazy observation: radio’s competitors are more interested in podcasting and smart speakers than the radio industry itself. That’s because those in the print and TV industries view the digital space quite differently than radio. Theirs is a ‘multiplatform’ strategy, meaning they’ll seize upon any new platform as a distribution method for their content. This extends to things like OTT video programming. How many radio stations do you know have an OTT program or even know what it is?”

An example of what OTT means for media: Disney is in the process of walking away from Netflix and is launching its ESPN OTT service this Spring with the Disney-branded one not far behind. Let this quote from some guy named Bob Iger drive the point home: “If anything points to the what the future of ESPN looks like, it will be this app.”

No kidding. Your radio transmitter is simply a means of content distribution, just like an MVPD. (An MVPD is cable & satellite TV, y’all.)

The whole point of going over the top is that you bypass the middleman and get your content right to your audience. (In three paragraphs, we’ll get to why that matters.) So, yes, your transmitter is an OTT service; it’s just not a digital one. It’s at this point that we should also observe that if your radio station has an app, that’s at least the beginnings of an OTT service.

Okay, let’s get to the part that should warm your content-creating heart…if you’re willing to accept its implications.

If ESPN’s future is on an app, then ESPN has to change.  Why? Because Disney doesn’t own the key content on ESPN, live sports. (In case you were wondering whether Mr. Iger realizes this, here’s one more key note from that Deadline story I linked to: “The company will invest in original content that will be made exclusively for the app, as it is doing for the general entertainment Disney OTT service launching in 2019.”)

Why will ESPN have to do that? Here’s the long version of it, but if you’re turning a profit with the content you produce, you’re sharing a ton of that profit with the distribution channels – y’know, the broadcast and cable networks – who are airing your content. Said differently: if you’re the NFL, and you can distribute all your content – including the actual games – to consumers directly, why would you share any of the revenue earned by that content with ESPN, a broadcast network, or anyone else? (And if you’re a popular syndicated radio host, you’re sharing a ton of your revenue with local radio in exchange for access to their distribution channels, which you call transmitters.)

And now, presenting the good news for radio creatives: you make your own content every day. That means two things:

That’s why the print and TV industries view the digital space differently from radio. It’s why the “failing” New York Times is doing ten figures a year in subscription revenue on the back of 2.5 million digital subscribers. If you think they’re doing that solely with old style print articles, you haven’t seen The Gray Lady lately. The NYT has been making short-form documentary films for years and has moved into the podcast space. In fact, come April, you’ll be competing with their The Daily podcast on terrestrial radio.

If your radio station isn’t doing everything it can to create a full palette of content – that means audio content that listeners can’t get on the air, audiovisual content, and yes, “print” content in blog form as well – you’re missing out.

Or would you prefer that the TV and print people corner the market?