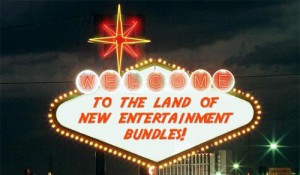 It was interesting seeing this blog post from this prominent venture capitalist who is a partner at this firm. (Short version: Fred Wilson’s been at it for 30 years, and there are plenty of unicorns in the Union Square Ventures portfolio, so he might have a little grasp of where American industry is going.)

The summary of the blog post is this: citing Amazon Prime and YouTube Red, he notes that entertainment businesses are creating non-traditional bundles, meaning that, instead of bundles of cable channels (your local cable company/satellite provider), audiovisual content (Netflix, etc.), or music (Spotify, Pandora, etc.) we’re talking about different types of content rolled into one diverse package, er, bundle.

Down the road, he predicts that Amazon and YouTube will add things like games and live sports to the mix. He also believes that others will enter the market, particularly mobile phone carriers. (And actually, Verizon Wireless has already started down that road with Go90.)

Let’s connect the rest of those dots with the two words that are driving the new bundling: media convergence.

That’s why both the New York Times and terrestrial radio are now making short-form videos while more and more print talents are appearing on electronic media. I could go on and on, but I’ve done that repeatedly.

So, if you’re creating all sorts of entertainment content, the obvious leap is to try to build a diverse, one-stop entertainment shop. Don’t just think about how you can bundle videos, or music, or books, or anything else. Think about how you can package all sorts of interesting (and presumably related) content in one never-been-seen-before combination, even if you have to partner with others to do it.

The big boys will bundle content with other things that consumers might want from them (and that send further commerce your way), as Amazon Prime does with free shipping. That’s obviously the Verizon Wireless gameplan, marrying content with the mobile delivery system for that content.

You may not own cell towers or giant warehouses, but how can you put together a unique bundle of entertainment for your fans?

And then, the obvious follow-up question: what happens when potential subscribers want only part of your bundle?

Will Amazon eventually have to take Amazon Video and separate it out from the free shipping portions of its business? To borrow the Fred Wilson example, if you’re looking to bundle video games with movies, what happens when subscribers only want to pay for half of that bundle?

So really, the challenge is to identify interesting new types of entertainment that we can bundle together and sell to consumers while giving those same consumers the ability to buy what we’re offering on a la carte basis.

That sounds complicated, but it really isn’t. We’ve all seen product pricing that reflects exactly these sorts of tensions. (Ever bought a car and had to choose between the gazillion different options for “upgrade packages”? Have you seen the packages that cable/internet providers are currently schlepping, complete with a landline telephone option?) We’re just not used to seeing it in entertainment.

Now would be a good time to get used to it.