Even In Showbiz, “It” Isn’t Everything 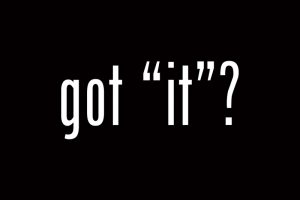 It’s funny how timing works. I’ve spent a lot of time lately discussing the “it” factor in a few different places, and up popped Steve Reynolds’ excellent thoughts on the subject on the Jacobs Media blog. I want to talk to you about it (and “it”) for a few reasons:

There are three reasons this matters: (1) if you have “it,” your boundaries are limitless, but (2) if you don’t do the things a great talent does to succeed, boundaries will start popping up incredibly fast, and (3) even if you don’t have “it,” if you do the other stuff really well, you can go very, very far as a performing talent in any part of showbiz, though we’ll focus on radio here.

Let’s illustrate using four people I’ve met, three of them radio talent, and one a very famous actor, but first, let’s be clear about this: if and when you read the Reynolds post – and you absolutely should – numbers 5 and, to an extent, 6 of his 10 factors really concern “it.” The rest is learnable behavior. If you’re willing to be intellectually curious, if you’re willing to be open and vulnerable, and if you’re willing to be part of a great culture that’s bigger than you, you can go very, very far as performing talent.

There’s no teaching “it” – you either have it or you don’t. You can’t fake charisma. You can’t manufacture the overwhelming level of magnetism that draws people – fans, coworkers, and coperformers – to you. Some people have a little of “it,” some don’t. Some people are overflowing with “it.” (Go watch any video of, say, Robin Williams to see “it” in action. You absolutely cannot teach that level of genius.) And yet, even those overflowing with “it” have to do the other stuff Steve talks about to truly make it big, and those who aren’t overflowing with “it” aren’t condemned to abject failure.

Got it? Good. It’s time to talk about showbiz people.

Let’s start with the actor. I won’t name the name, but I’ll tell you this: he’s worth unimaginable money, has hundreds of credits to his name, along with triple digits worth of award nominations (including plenty of Oscar nods) and 50+ award wins. His IMDb STARmeter number is generally between 100 and 300. (DiCaprio is currently at #94 if that gives you an idea of how big a deal a number in the low triple digits is.) This is a name you know and a face you’ve seen all over TV and film.

He’s loaded with “it,” and he’s spectacularly talented with stunning range. And yet, he’s never been a true household name. You know who he is, but he’s not a Streep, Hanks, Bullock, DiCaprio, etc. One day, I saw why.

Sitting on a movie set between shots, I spent maybe half an hour talking to him. He’s a truly nice and genuine guy.

He also turned me off to doing film work.

Why? I left with the feeling that he was the latest in a series of similar types I’d met with absolutely no life outside of acting. Our entire conversation consisted of directors he’d like to know and roles he hoped to be considered for. Including some other small group conversations that day, I only spoke to him for maybe 90 minutes total, so it’s entirely possible that I’m wrong about him, but my sense was that he doesn’t have the interest in the outside world that a great talent needs to truly hit it big.

That puts me in mind of perhaps the most “it” talent I’ve ever worked with. This is a morning guy who was so charismatic that I knew well before I ever met or heard him that he had “it” in spades. How? I listened to his radio station. He was fairly new to the business, and yet the entire airstaff – made up of extremely veteran talent – was talking about him constantly and with amazing enthusiasm. He was a rock star to his own veteran, somewhat jaded team. You can’t imagine how big a rock star he was to his fans.

His career began to take off. He had some great successes for a while. Then, everything just…stopped. He leveled off. His growth phase ended, and in showbiz, if you’re not on the up escalator, you’re on the down escalator.

What happened? Go read Reynolds’ points numbers 2, 3, 7 & 10. Most notably, he reached a place where he decided he no longer needed to have any intellectual curiosity. Instead, he built a silo around himself and decided that he’d done enough and that his audience should come to him, rather than his going to his audience.

His hardcore fans didn’t go away, but enough audience did that growth just ended. You may safely assume that bad things happened.

The other great talent who I want to tell you about did the opposite. She is a remarkable fountain of creative energy, passion, and charisma. She’s also the textbook definition of intellectual curiosity. At an alternative rock radio station, she built a book club for listeners. Upon arriving in a foreign country, she asked to be taken straight to a local mall because it had a display featuring the world’s largest book. She’s always learning, asking questions, and expanding the breadth of her “act.”

When I met her, she was doing overnights in market 30. By the time she decided earlier this year that maybe she was tired of the radio rollercoaster, she’d done 20+ years in major dayparts in three top-10 markets before being recruited by a major international broadcaster. (Oh, and if you’re looking for a truly remarkable talent and have the right offer, call me, and I’ll connect you. Radio would be far better off with her back in it.)

Finally, I want you to meet someone who is a great guy, but not an “it” guy. Rather than bore you with the details, read my post about him – and the one sentence that changed everything – here. Through a commitment to being open with his audience, intellectually curious, and relentlessly pursuing growth (including taking improv lessons 20+ years into his career), he was and is a spectacular performer. I could tell you plenty of similar stories about talent like him.