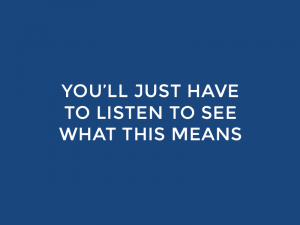 I want you to listen to the best audio commercial I’ve ever heard. Two big shocks: there’s a twist, and I’m using the spot to make a point.

The twist? The spot is two minutes long.

The point? Let’s start with a small piece of this interview with the CMO of JPMorgan Chase, Kristin Lemkau. I’m going to have a lot more to say about the interview in another post (or two), but for now, let’s focus on this quote regarding why she’s avoided using preroll advertising on YouTube except when she has the absolute right content for her spots. Her point, needless to say, extends far beyond the digital space.

“[Y]ou don’t have the right to interrupt a consumer’s experience in a digital environment when they are a click away from infinite choice…The real issue is the ad unit and I’d love to find a way that we can collaborate on more content so you’re not forcing a consumer to watch it. And then you feel good about it because it’s viewable and it’s a human and it doesn’t measure that you’ve massively pissed off that consumer and they may not buy your product.”

It’s obvious, right? In an era of infinite choice in content, you can’t shove bad advertising down your audience’s throat. And yet, it’s amazing how much messaging is out there that is either just plain bad or is just fine in the right context, but is running in exactly the wrong context.

So, here’s an example of phenomenally good messaging placed in the exact right context, and the kicker is that the commercial in question is, as I mentioned, two minutes long. That’s two minutes worth of interruption placed in the middle of one of the most popular audio shows on the planet.

After you’ve listened, let’s talk about what makes the spot great.

Before we get into the why, let’s break down what this 2:00 live read consists of:

Why does the spot work? Let us count the ways:

First, the lead talent on the show is doing the read. Obvious, right? On podcasts, the lead – and often only – talent reads live spots all the time. That’s not how this stuff works in other mediums, is it? For every radio morning talent who reads her or his own spots, there’s another who farms the reads out to a lower level player.

Second, the talent is invested in the spot. Even Gladwell, in his first season or two, wasn’t particularly into his reads, which were done with very stock ZipRecruiter and Blue Apron scripts. In season three, you can hear the difference. I don’t know whether that’s because he found out he needed to throw himself into his spots in order to generate results, or whether his advertisers have finally allowed him to have fun with their copy  (though I bet the latter has a lot to do with it).

Third, as part of his investment, Gladwell is making the read feel truly organic by incorporating the same sense of mischief that he imbues Revisionist History with into the commercial read. That means two things, one more obvious than the other:

Fourth, the callback matters. In day-to-day radio, with listeners punching out, on average, within ten minutes of punching into a radio show, you can’t call back old material unless it’s material that you’ve been using repeatedly – with a devoted audience – for a very long period of time. Gladwell’s audience is devoted enough that he can call back material from two seasons ago, and doing so reinforces his message rather than confusing the audience. Usage matters: you can do things in a podcast that you can’t do on terrestrial radio. (You can also do things on TV than you can’t do in live theater, and so on and so on. The point here is that how your consumer is using your content drives what you can and can’t do with your content.)

Finally, there’s the placement, meaning that the Gladwell commercial is placed in Gladwell’s show. Sure that sounds obvious, but think about what I’m really saying here. The very same spot would be interruptive and a complete tuneout on another show, particularly on another show that speaks to an audience that doesn’t also listen to Gladwell. It works because, if you listen to Gladwell, you don’t just like what’s he’s all about, you understand it. Something that would, at minimum, make absolutely no sense in any other context, makes sense in the middle of Revisionist History.

All this seems obvious, so let me give an example of the opposite. Once upon a time, I heard an absolutely brilliantly done hip hop song which was, in reality, a commercial for a local Volkswagen dealer. The song would not have been out of place on the hip hop music charts. I heard it on the local hip hop radio station, and it spoke perfectly to the station’s audience.

Then, I heard it on the local classic country radio station. I’m sure that both of the listeners who could even understand the words in the song/commercial retained at least a part of the advertiser’s message.

Yeah, I know. This is painfully obvious stuff, right? In fact, it’s so obvious that the material in this little compendium is absolutely unthinkable. After all, it’s not like:

Special bonus: as I finished writing this, my video extremely beloved alma mater sent me a link to a extolling it…while using Bruce Springsteen’s “Glory Days,” a song about being stuck in the past.

So, there are three major takeaways here:

You’re thinking about all this stuff…right?